The corporate fonts are definitely worth spending money on. Among many other things that corporate fonts can do, the important one is to create an appropriate atmosphere and enable users to develop trust toward your company. Since written text is the most efficient instrument to communicate with visitors precisely and directly, the power of typography shouldn’t be underestimated. The one example of corporate typography that I found very efficient regarding their identification with the lifestyle and culture of their target audience is the West Coast Customs company typography on their logo.

About the company: The West Coast Customs is an automobile repair shop focusing on the customization of vehicles. It was started by co-founders Ryan Friedlinghaus and Quinton Dodson in 1994. Owing to the patronage of celebrities such as Shaquille O’Neal , and Sean Combs, along with appearances in the reality television programs Pimp My Ride and Street Customs, the company has gained a high degree of notoriety and has become a multi million-dollar business. Besides celebrities, West Coast Customs has also created vehicles for global brands such as Virgin, Nintendo and Microsoft. It is frequently characterized as one of the best custom car shops in the United States. At the beginning the company was located in Orange County, California, then they moved to Los Angeles. Currently, the company is based in Burbank, California, at the facilities of an impressive 60,000 square feet space. The space is divided into 12 sectors that are tailored to different services and projects for different budgets. The company has franchises in Dubai, Mexico, Germany, Malaysia, Russia and Japan. They present and exhibit their work at various locations. The modified cars of the company also appear in well-known video games such as Grand theft car 5 and Los Santos.

Reason I decided to analyze: Typographic logos are the most common type of logo designs, since they consist of no-nonsense and to-the-point typography. It’s a simple and straightforward way of defining a company. Extremely intuitive handling of typography along with countless hours of effort is needed to create a readable, memorable and personable mark. In many cases, a typographic logo design is a starting point for the addition of descriptive or symbolic elements. Based upon their content, symbolic logos can also be divided into two sub-categories: descriptive logos and abstract logos. Here we are talking about one descriptive logo.

The logo of the West Coast Customs company associates to West Coast hip-hop culture. West Coast is the US Geographical Region. It is mostly inhabited by immigrants, and has a young population. One of the very well-known movements of the hip-hop music is the Gangsta rap that roots from the West Coast began to dominate at the 90s. The main elements of hip-hop culture include: Mcing, Djing, Hip-hop Dance (brake dance), B-boying and urban art (graffiti). Graffiti range goes from simply written words to artistically crafted paintings on the walls. Besides of hip-hop music, gangs also used graffiti to mark their territory or to express the role and indicators of various gang activities. Still the main features of graffiti are: the personal expression of the artist, associated with the cult of gamers, expressing radical and political messages and influencing the thriving of hip hop culture. The most common kind of the graffiti is the so-called Tag that represents the personal signature of the artist. The tags often contain hidden messages as well. The logo of the West Coast Customs company is based on Tag. It is associated to the lifestyle and culture of California or West Coast. 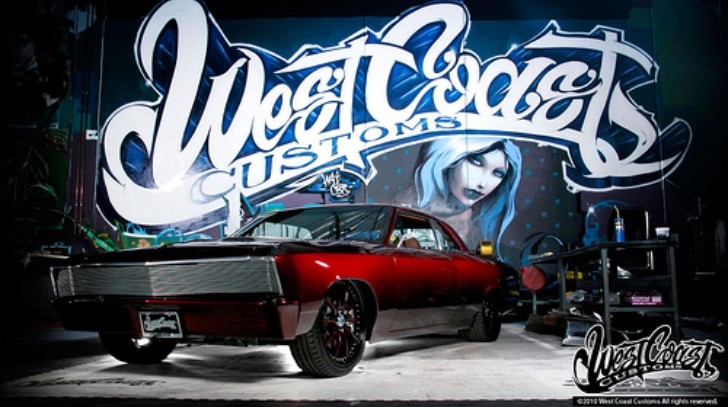 Typography: The typography used to create this logo is consisted of characters that do not belong to some well-known font. The designer has created letter characters inspired by graffiti, with a combination of tagging, calligraphic letters and wild-style.

The word: WEST COAST. The style that dominates the relevant logo is called WILD-STYLE in the art of graffiti. Because of the complexity of this style, it is often very difficult to read what is written, especially to people who are unfamiliar with it. Usually this form of graffiti consists a series of overlapping letters and shapes. This may include arrows, spikes and other decorative elements, depending on the technique that is used. Numerous layers and shapes that define this style, make it extremely difficult to produce homogeneity, which makes this style one of the greatest artistic challenges for graffiti artists. The West Coast culture has inspired many young designers to create new fonts that are based on this style. It’s interesting to look at the diversity of this type of font on the site:

Although the fonts that are recommended in design are sans-serif fonts, especially for web sites, because they are more visible and readable on the screen, here this rule is completely ignored. The reasons why designers have opted for such typographic elements are in the West Coast culture of expression. This culture is very closely related to hip-hop culture and is popular throughout the world equally among all races, even though African Americans have started it. The West Coast Customs deals with modification of cars, which means that such a style of expression in this case is fully justified, expected and in line with the company’s aim and culture as well as with their clientele.

The word: CUSTOMS, is written with the font Minion pro, bold. But the word was later distorted (probably with an option distort or with disproportionate scaling) so they got exaggeratedly modified form of letter characters and the new and unique typography. I believe that this is a hidden message of this Tag because the company deals with the modification of the cars so it is fully in line with corporate values and culture. This logo is transformed from time to time, here is one example of the related logo modified for the largest American holiday, the Independence Day.

Unfortunately I could not find the name of the designer who designed this logo. If somebody knows his name please send it to me so I can mention him in this post.