Bayside Marketplace is a part of Miami Downtown. It is located between the Bayfront Park to the South end, and the American Airlines Arena to the North, right along the banks of the bay wall. 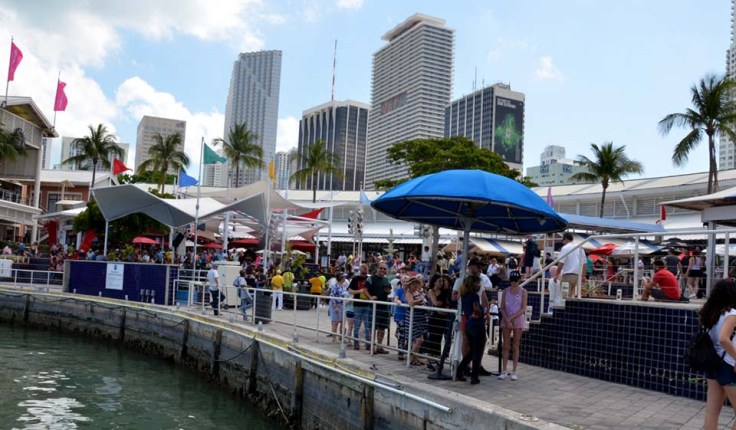 The marketplace and marina attract many tourists all year-long. 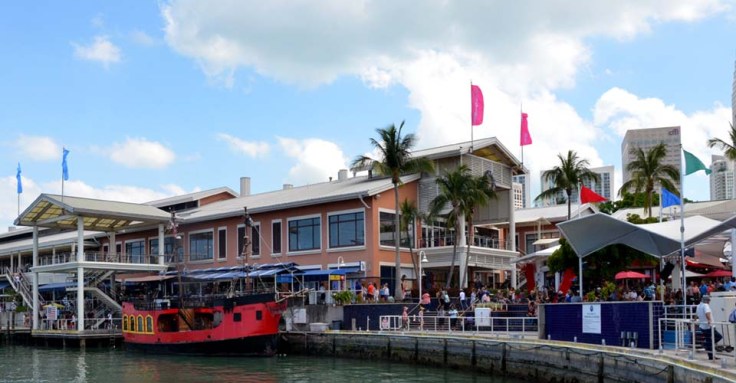 This place literally has everything you are going to need in order to have a good time. 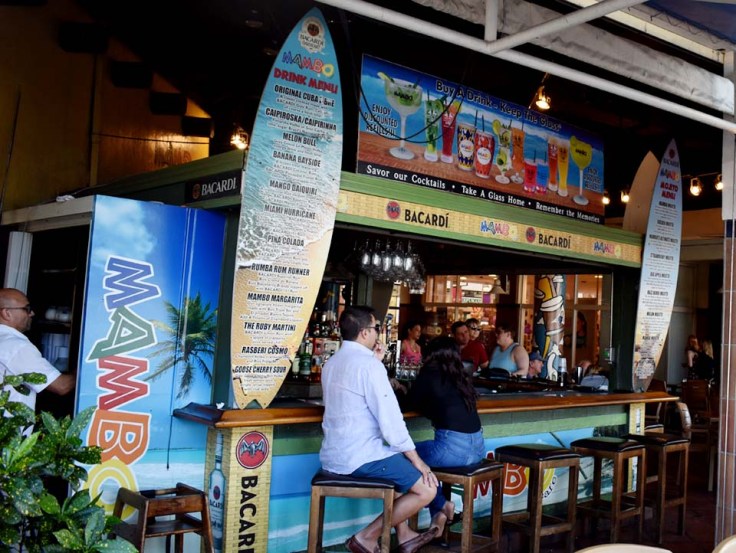 If I had more time, I could literally spend an entire day there.

My boyfriend and me discovered this place thanks to the organized boat tour that we booked through Viator. If you wish to book the same tour, please press the link with word Viator.

We went for the boat ride through the Biscayne Bay to have a glimpse of the Downtown Miami and some rich and famous mansions on the islands such as Star Island, Fisher Island, etc. I described the boat tour in my previous blog post, Star Island and Downtown Miami.

The Bayside Marketplace area offers shopping, a wide variety of cafe, restaurants, bars, scheduled live music and adequate parking. Regarding the activities, they offer a great variety of tours, which includes boat tours of the surrounding area Star Island, Fisher Island, etc., a pirate boat tour, a speed boat experience and a party boat in the evenings from the Bayside marina. I really wished that I could stay at least five more days and go on all these tours.

A lot of bus tours leave from here too, because of the big parking area in front of the Bayfront park.

This area is very lively during the day but at the evenings it takes on an even more vibrant attitude, thanks to the live music performances.

The amazing view towards the ocean and the marina is relaxing and entertaining, especially to watch all these boats and yachts constantly coming and going.

Bayside Marketplace was one of the many shooting locations for the TV series Miami Vice, which aired on NBC from 1984 to 1989.

Bayside Marketplace is the home to one of the two walks of fame in Miami. In 2014, the mall unveiled its version, designed by Miami pop artist Romero Britto.

Bright-blue stars line the pavement and honor those who have contributed to Miami’s charisma, including comedian and North Miami resident Kevin James aka Paul Blart: Mall Cop.

This movie was not filmed in Miami, but you can see a lot of cops on Segway scooters in Miami too. I always laugh with this movie and this actor is so great and hilarious. In my opinion he deserve the star he got. 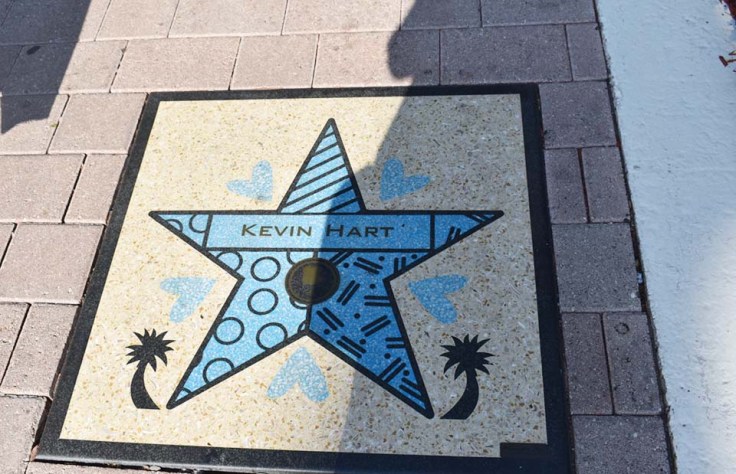 You can also see the stars of Jamie Foxx, Andy Garcia, Ice Cube, Kevin Hart, etc. I enjoyed the strolling through the market very much.

But most of all I enjoyed the live music performances in front of the rounded stage by the bay wall. 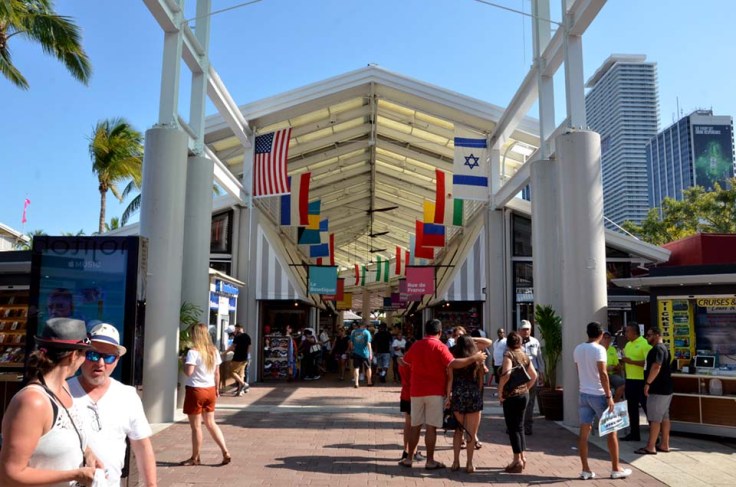 The sound of Cuban music was creating a great atmosphere, people were dancing in front of the stage, children were playing around, everyone was smiling.

We enjoyed the music while drinking our Pinia Colada’s cocktails at the bar in front of the stage. 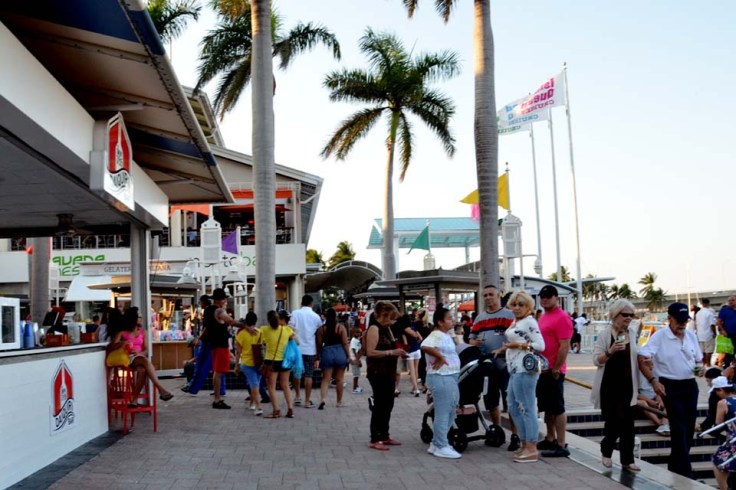 There are a lot of pickpockets strolling around the market, please be careful and always have your eyes on your belongings. I had my purse beside me and one strange man was standing right above, he was probably waiting for the right moment to grab it. But I noticed him, so I put my purse on my knees. As soon as I did this, he went away, probably to look for another unsuspecting victim. 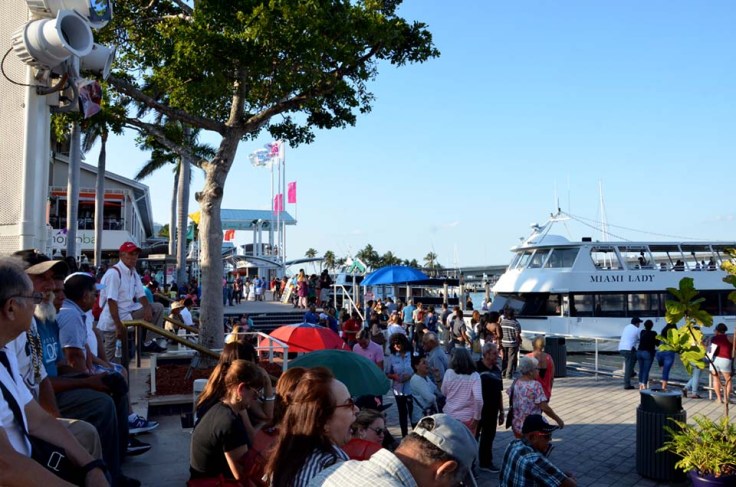 At the Bayside Marketplace we also had the chance to watch police arresting someone for the first time in our life. I don’t know the reason why the young man was arrested, but we saw the two policemen, handling the hand-coughed man and taking him to the police car. 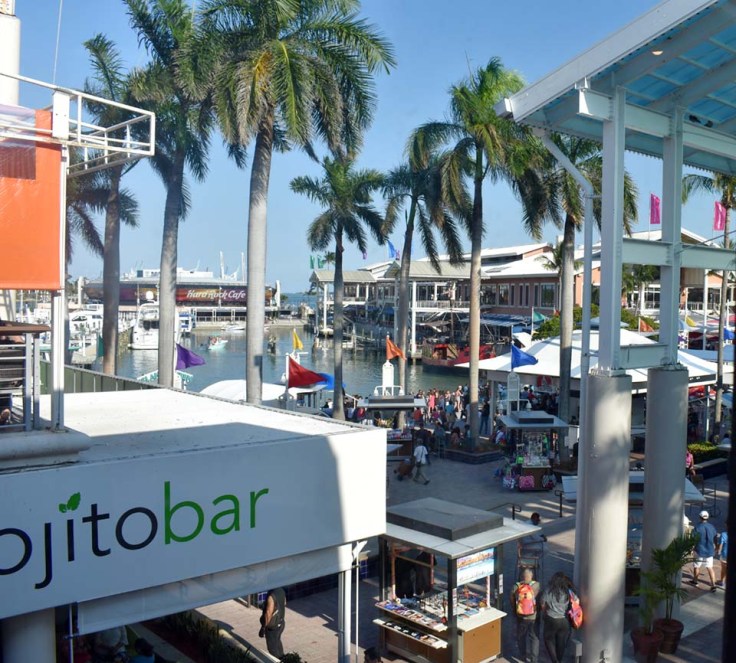 It almost felt like we were staring actors in the Miami Vice series. Until then I had only see this in the movies.

The young man was calm, with his head down and he did not show any sign of resistance and was treated nicely by the police.

Sorry that I didn’t took any pictures of arrest, for obvious reasons. I was in a foreign country and I don’t know if it is legal or not, so I didn’t want to get in trouble.

Anyway, you should always be careful. 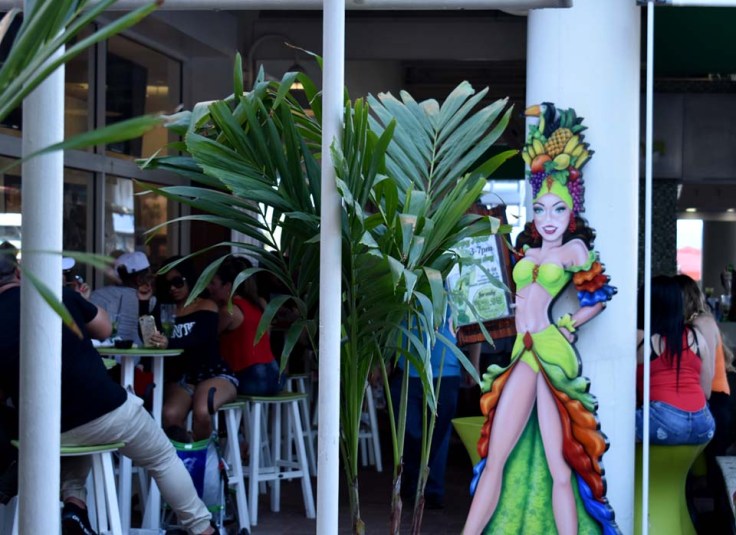 Anything can happen in a such of a lively and crowded place.

There is the famous and monumental Banyan tree of the Bayside marketplace.

A lot of tourists were taking photos under the tree. 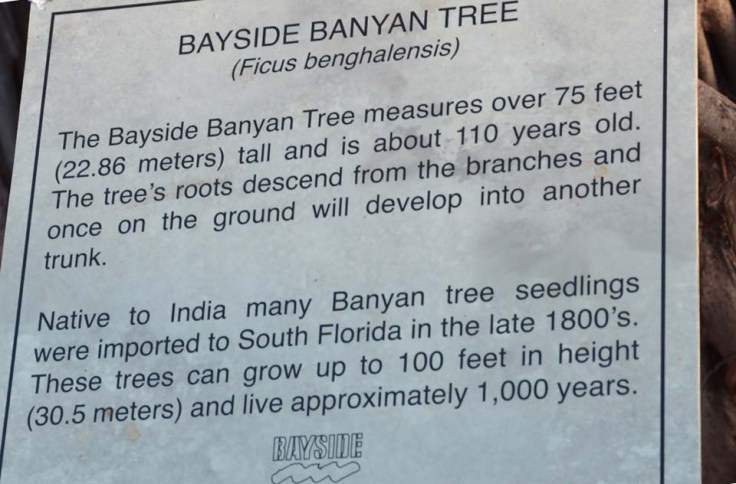 So I did it as well. 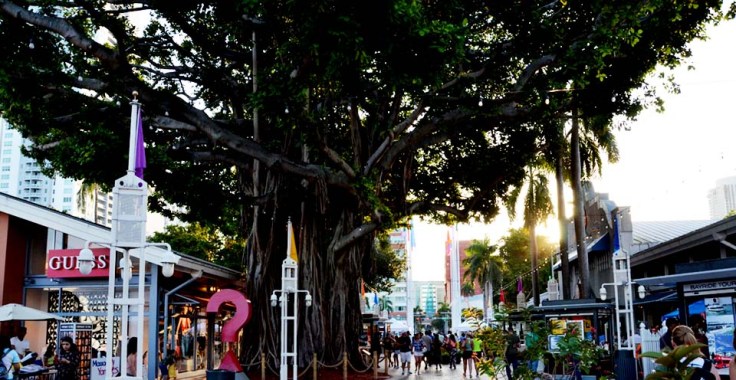 This tree was really huge and about 100 years old.

When our bus driver left us at the Bayside marketplace, he said that we have one and a half hour free after our boat ride for strolling at the market. But we liked this place so much that we decided to stay longer and go back to the hotel later by taxi.

But since we are responsible people, we went to the parking place at the appointed time, to inform the driver that we are going to stay, so he doesn’t have to wait for us.

While we were waiting for our bus to come, we were sitting under the shade of one big tree.

The lady who was sitting at the table with us noticed one big iguana on the tree. He was hidden, so I could only see his head.

Since he saw that nobody is moving near the tree, he went out slowly. He was standing there and he was watching us from distance and nodding with his head.

He was probably trying to send some message to us. Maybe he wanted us to know that this is his territory. 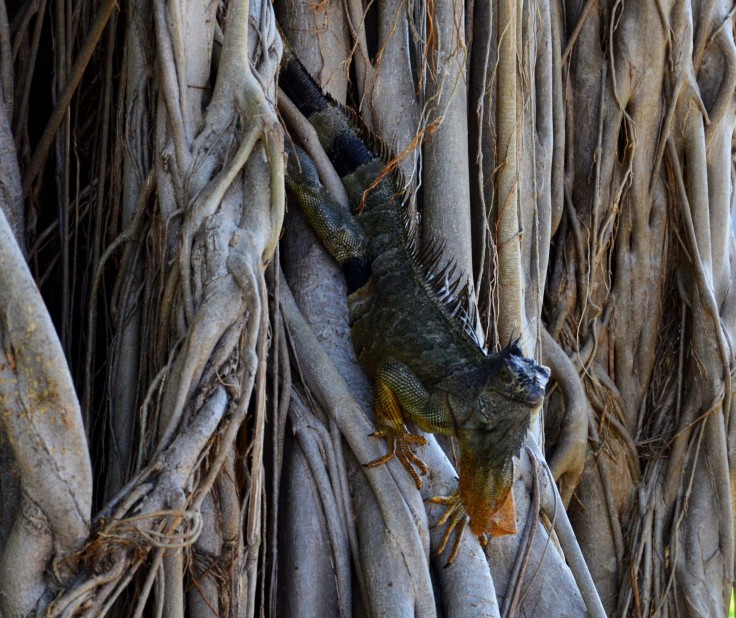 Or he was just saying hello, how nice to see you, but stay away from my tree.

Anyway, I had the great pleasure to meet him and it was an amazing experience for me.

We saw some iguanas on our day trip to Key West, but we saw them from distance while we were on the ride with the city trolley. This was the first time I faced an iguana so closely, because we were sitting on the table just a meter away from the tree.

Besides of the iguana, we also saw few squirrels under some other tree.

There are a lot of squirrels in Miami. They were everywhere, even in the city center we saw a lot of them. In the gardens of the Fontainebleau hotel where we were staying we saw some as well. 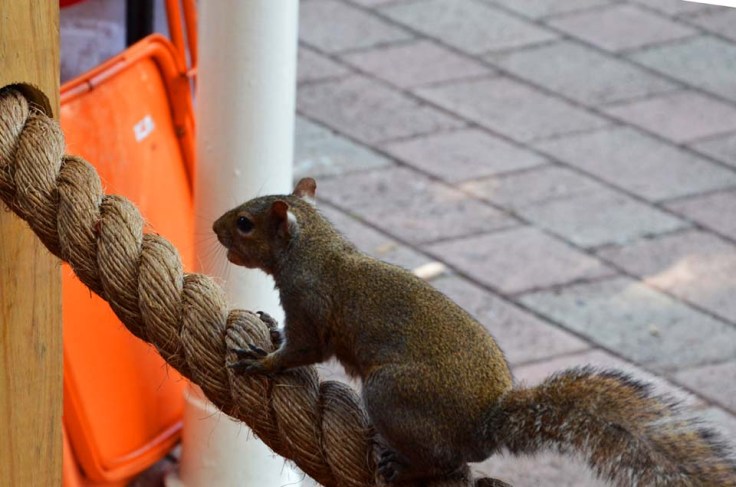 Later on our bus showed up. I was not surprised that a few other couples from our group decided to stay at the Bayside marketplace as well.

We continued with strolling around, but at some point we got hungry. We intended to eat at the famous American burger fast food restaurant Hooters, but the queue was so long to reach the entrance. So, we decided to eat at the Five Guys Burgers.

Even though this was a simple fast food place, the prices was pretty high, maybe because of the location or because it is a famous brand in America.  It was our first time eating at a fast food restaurant since we arrived in Miami, so we were kind of surprised. This was also our first visit to a Five Guys Burgers in general. In Europe the fast food restaurants are much cheaper than here, for sure. Anyway the food was tasty and the interior was decorated in a kind of retro style decor, with a lot of red details. But this place needs some tidying up, for sure. It was trash all over the place, and some drinks spilled on the floor, and nobody from the staff was cleaning it.

So as I mentioned, the food was OK, nothing special though. But my biggest disappointment since I work in the hospitality industry for so many years, was the lack of smiles, positive attitude and communication skills from the staff. Most of them seemed to be bored and not so happy to be there.

As for the shopping, the prices were a bit higher than at the Lincoln road street and mall, probably because of the highly touristic location.

But there are so many choices for shopping, from souvenirs, to clothes, shoes, bags, art galleries, cosmetics, home design, and whatever you can imagine.

They had shops where they were making custom-made licence plates and signs, custom-made embroidery on the Jockey Caps and shirts, you can even purchase shark jaws there, and a lot of other crazy stuff. 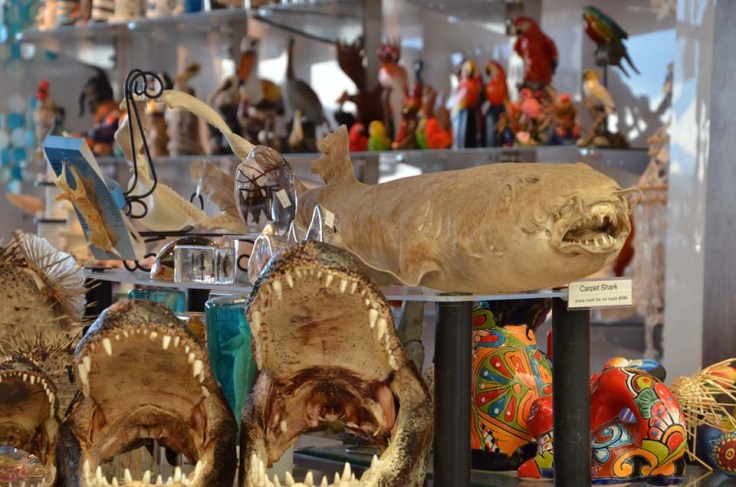 Stay tuned if you wish to learn more about the rest of our adventures in Miami.