As I mentioned in my previous blog posts my boyfriend and me visited Krakow, Poland for the first time a few weeks ago. Since we both love history and especially we are interested to learn everything regarding the WW II we decided to book the tour to the Former German Concentration Camps Auschwitz and Birkenau, that are located in the vicinity of Krakow.

I also wrote few blog posts about Krakow, if you are interested to find out more about this city, please check out my previous blog posts.

We booked the tour through Viator and it was one tour that included also a visit to the oldest salt mine in Poland Wieliczka. But since I had to tell a lot about all of these locations, I put each location in a separate blog post in order to be more specific.

In this blog post I will describe our visit to the Birkenau camp and everything I learned from that experience. 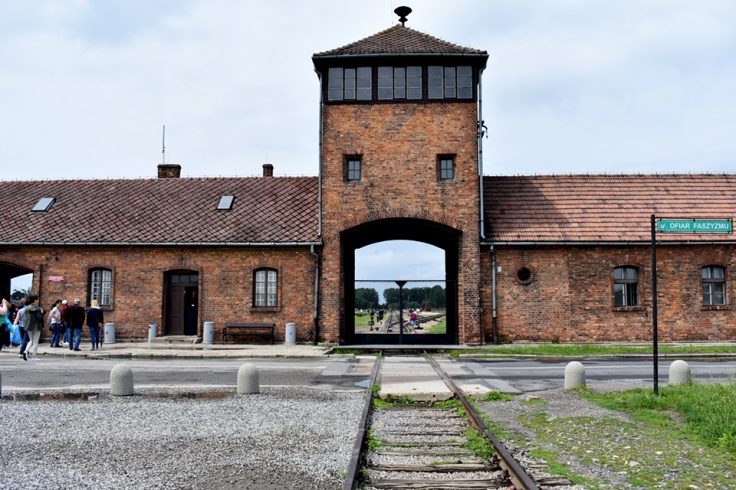 In autumn of 1941, during the WW II Germans started to build this concentration camp near the Polish village Brezezinka (German Birkenau). It is located 3 km from the Auschwitz I that I described in one of my previous blog posts.

This camp was the largest one that Germans ever build in order to exterminate Jews and all the other undesirable elements for them. 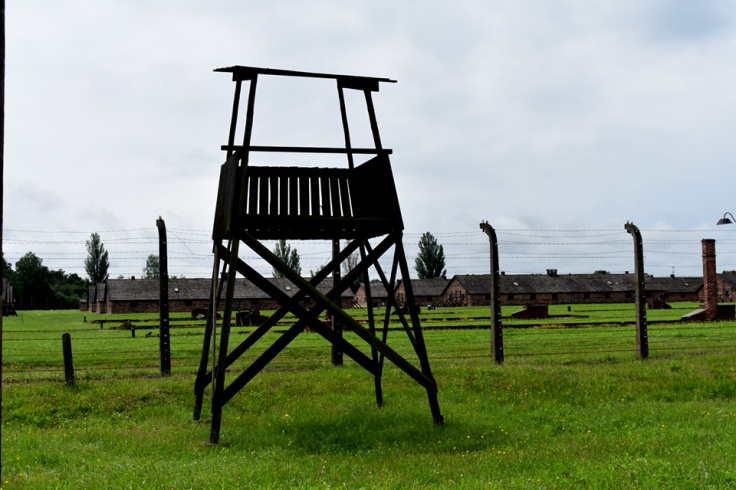 The first gas chambers and crematoriums began functioning near of the camp, at the first half of 1942. 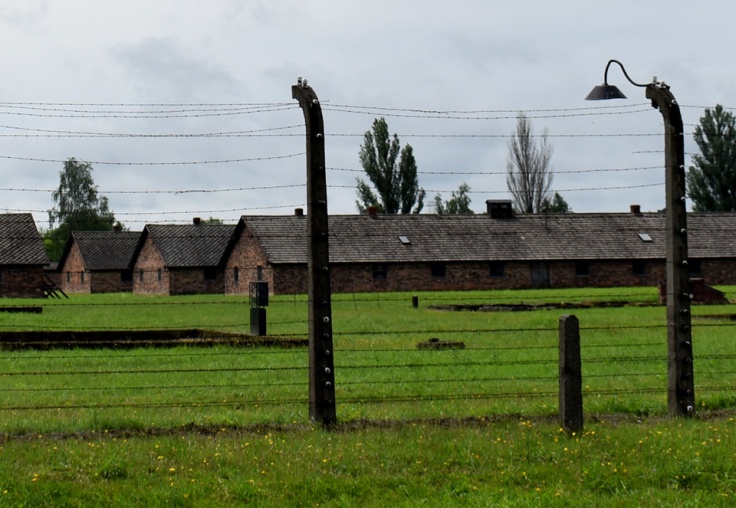 They were bringing prisoners with trains. The trains were stopping at the ramp or unloading platform that was the central point of the camp.

Their intention was to build the camp for 100 000 prisoners, but those plans later changed since more and more trains with prisoners were coming from all over Europe.

So they were extending the camp all the time. Because Hitler had decided to annihilate the Jewish people, Birkenau was mostly changed its purpose from a labor camp to an extermination camp.

By the spring of 1944, the camp had more than 300 buildings, mostly wooden barracks.

The unloading ramp was in the middle of the two camp sections, B1 and B2. The road between the sections was leading directly to the gas chambers.

The majority of new arrivals were classified by SS doctors. Those who did not fit for labor work were immediately sent to the gas chambers, mostly children, pregnant women, and elderly people. 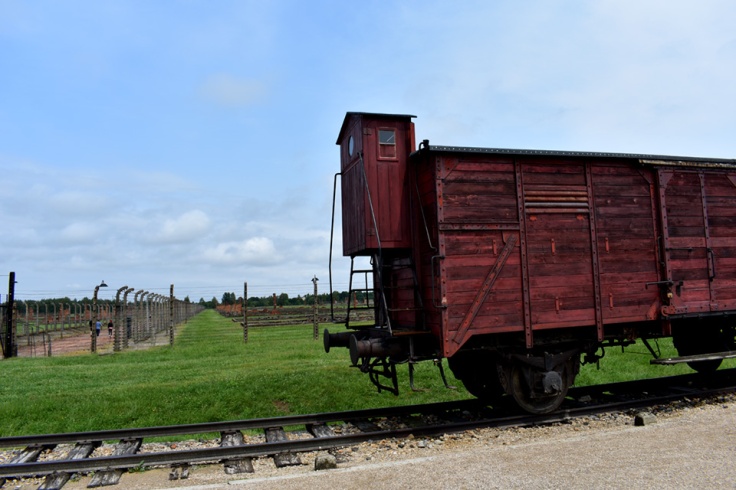 Today one of the original wagons that was transporting the prisoners is still placed on the railway as a reminder of the conditions in which those people were brought in the camp. 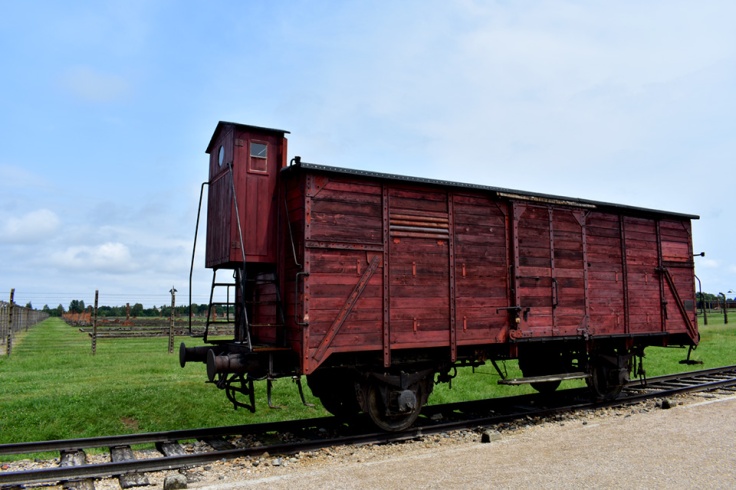 The main camp bathhouse,  known as ”sauna” housed equipment for disinfecting of prisoners’ clothing. It was located in the vicinity of the gas chambers and crematoria.

There Germans collected all the property looted from the victims.

The items were later on transferred onto the warehouses that prisoners called ”Canada”.

It was located opposite to the bathhouse building. They called the warehouse Canada because Canada was seen as a land of plenty.

At the arrival the suitcases were taken from the victims. They were asked to put their names and address on it with the promise that it will be send back to them after they finish with their labor obligations at the concentration camp.

Later on, before entering into the gas chambers, they had to leave all their belongings in the undressing room such as shoes, clothing, glasses, valuables, and everything they carried. 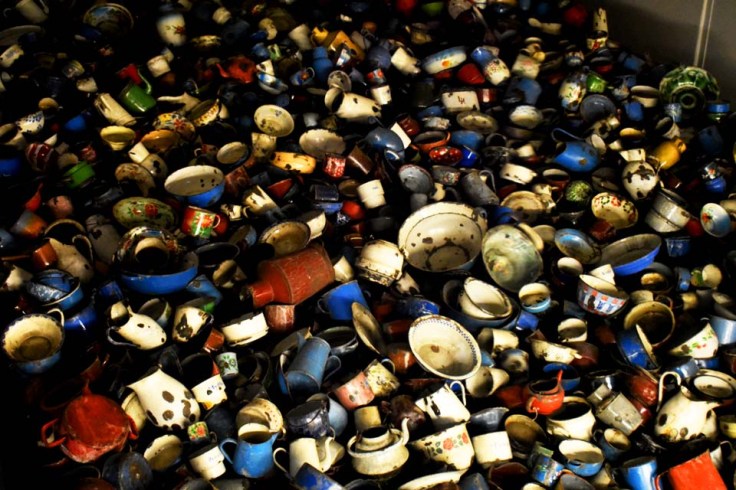 Those objects were also carried to the sauna, and then in Canada warehouses.

During the upcoming liberation in January 1945,  Germans tried to remove all the evidence and traces of their crimes and since most of the barracks were wooden they set them on fire while they were leaving.

They took along with them all the prisoners that were able to walk, on the big march of death.

But some of the items were saved from the fire especially those that were still outside of the warehouses ready for selection, the liberation army found them and they are preserved and exposed in the Auschwitz museum today.

The ashes from the crematoria were loaded on trucks and thrown into the Vistula river. The traces of human ashes with a small pieces of bones were still present in the vicinity of crematoria and burring pits.

The brick barracks were they kept the prisoners were designed for about 700 people, but many more people were actually living there. Prisoners were stuffed one next to each other in the three stores bed places, with no pillows and the less blankets than the prisoners. There was no hierarchy regarding the sleeping place. It was a first come, first serve.

Of course all prisoners were signed to one specific barrack. There was a few small fire places in the middle that was not enough to make the place warm in the cold winter days.

Those bricks were what is left of the seven Polish villages that once existed in the area, before Germans came. 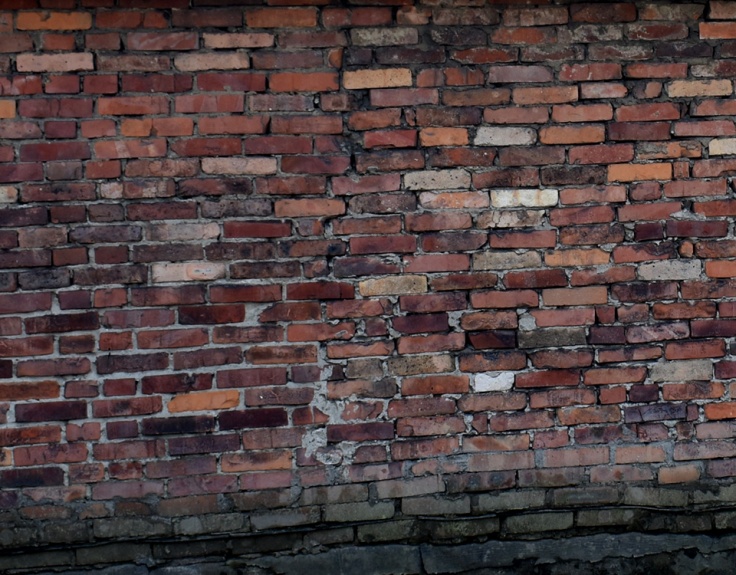 They start to make wooden barracks, when they finish up with bricks. They were designed for 400 people. They had no windows. All that is left of the most wooden barracks are just chimneys. 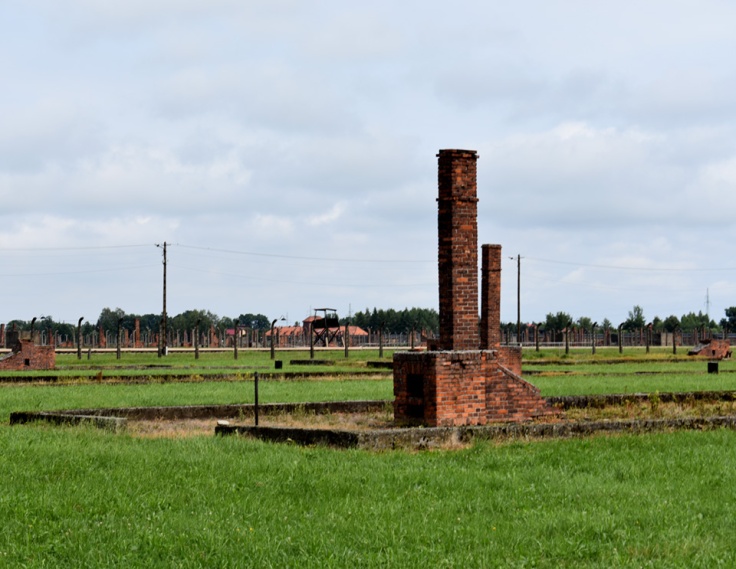 Our tour guide said that at the time there was no grass around the barracks. Because the prisoners were so hungry that they also ate all the grass that they could find around their barracks. And not only the grass, but any kind of animals they could catch such as rats, cats or dogs, there were also some cases of cannibalism. It was so terrifying for us to hear this.

Prisoners were receiving a hot drink in the morning, but no breakfast, and a thin meatless vegetable soup at noon. They worked very hard for about 12 hours per day. They also had to walk to the factories and back, many kilometers per day.

In the evening they received a small ration of moldy bread. Most prisoners were saving some of the bread for the following morning. But it was practically not enough. On Sundays they didn’t work in the factories, but they were busy with cleaning the barracks.

The daily intake did not exceed 700 calories, except for prisoners being subjected to live medical experimentation, who were better fed and clothed and those who did a heavy jobs regarding getting rid of the dead bodies.

The carriage you can see on the pictures above and below, was used to bring the bread for the prisoners, and on the way back to pick up dead bodies, from the prisoners that died of starvation.

The prisoners that were doing killings and were dealing with the dead bodies were receiving a big amount of alcohol daily as well. Because of the things Germans made them do to their fellow men only a drunk person could do.

Besides all of this that they were forced to do they also knew that they are all going to be killed within few months. Because Germans never kept those workers longer, in order to erase all living witnesses of their crimes. 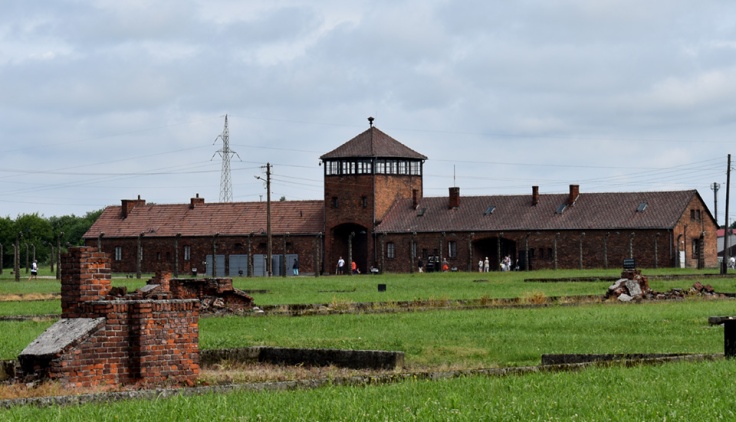 Therefore those prisoners were ones that were most often the camp rebellions and those who attempted to escape the most. 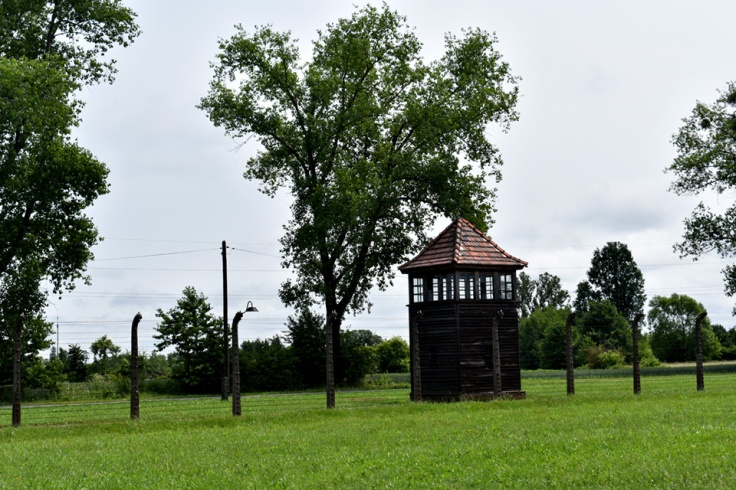 From 928 prisoners who attempted to escape, only 196 prisoners escapes were successful. 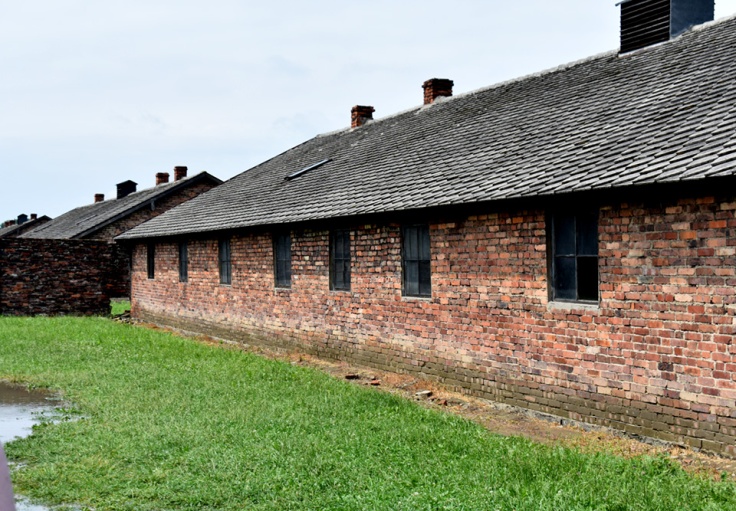 Many of the prisoners that were not killed in the gas chambers died of starvation, forced labor, infectious diseases, individual executions and experiments. 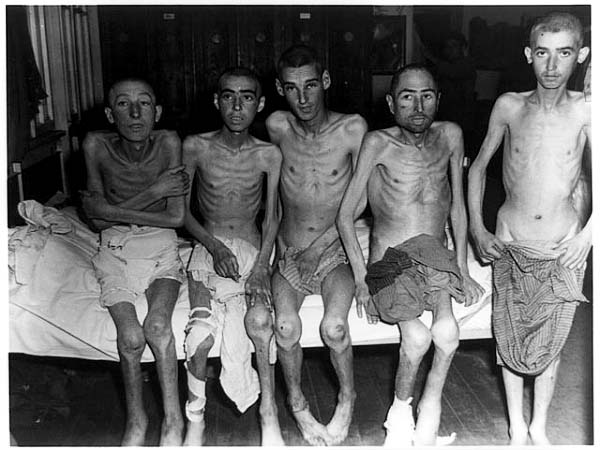 According to Wikipedia, regarding the living conditions of prisoners I find out that: ”Eight hundred to a thousand people were crammed into the superimposed compartments of each barracks. Unable to stretch out completely, they slept there both lengthwise and crosswise, with one man’s feet on another’s head, neck, or chest. Stripped of all human dignity, they pushed and shoved and bit and kicked each other in an effort to get a few more inches’ space on which to sleep a little more comfortably. For they did not have long to sleep”. 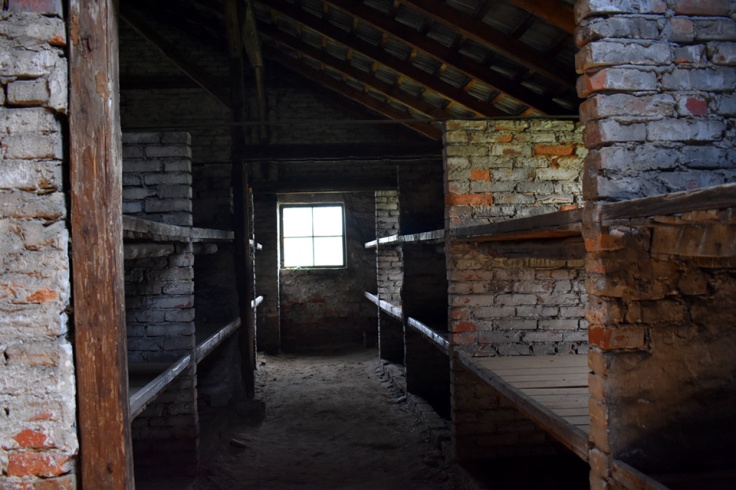 The types of prisoners were distinguishable by triangular pieces of cloth, called Winkel, sewn onto on their jackets below their prisoner number. 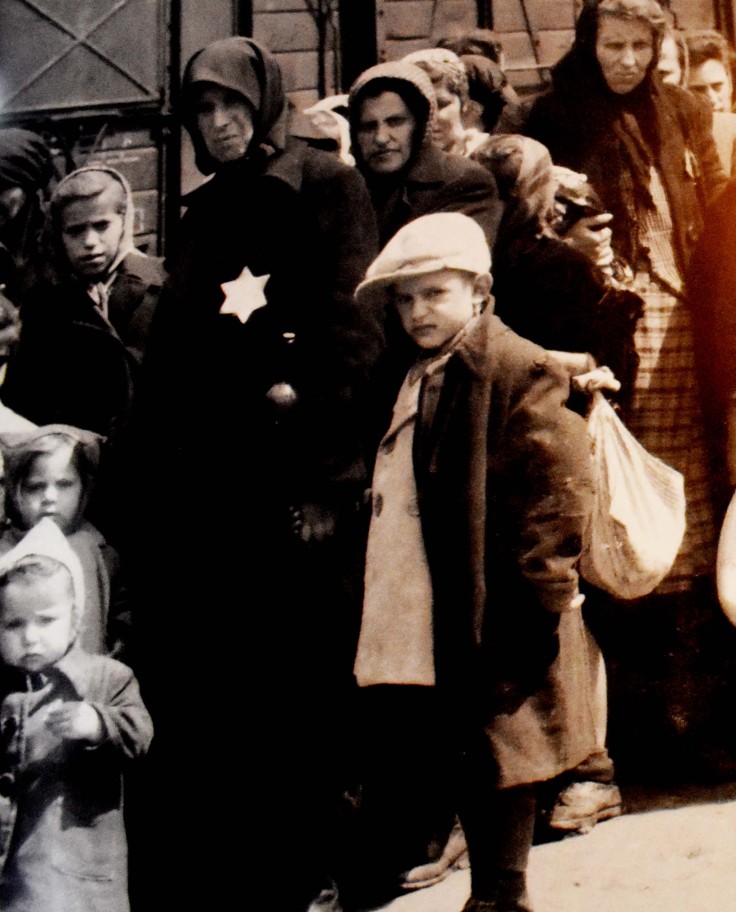 Political prisoners had a red triangle, Jehovah’s Witnesses had purple, criminals had green, and so on. The nationality of the inmate was indicated by a letter stitched onto the Winkel. Jews had a yellow triangle, overlaid by a second Winkel if they also fit into a second category. 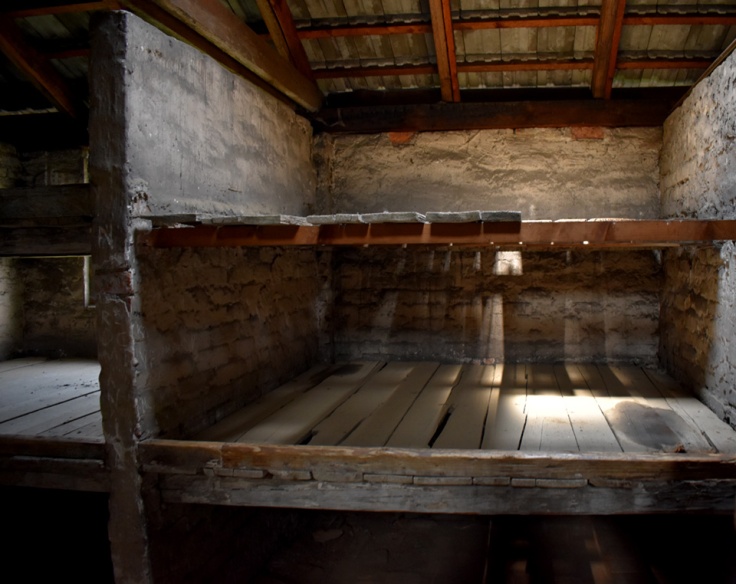 A separate camp for Roma was set up at Birkenau known as the Zigeunerfamilienlager (Gypsy Family Camp).

The first transport of German Gypsies arrived on 26 February 1943, and was housed in Section B-II of Auschwitz II. Approximately 23,000 Gypsies had been brought to Auschwitz by 1944, 20,000 of whom died there. Gypsy prisoners were used primarily for construction work.

All prisoners were tattooed with their prisoner number, on the chest for Soviet prisoners of war and on the left arm for civilians. 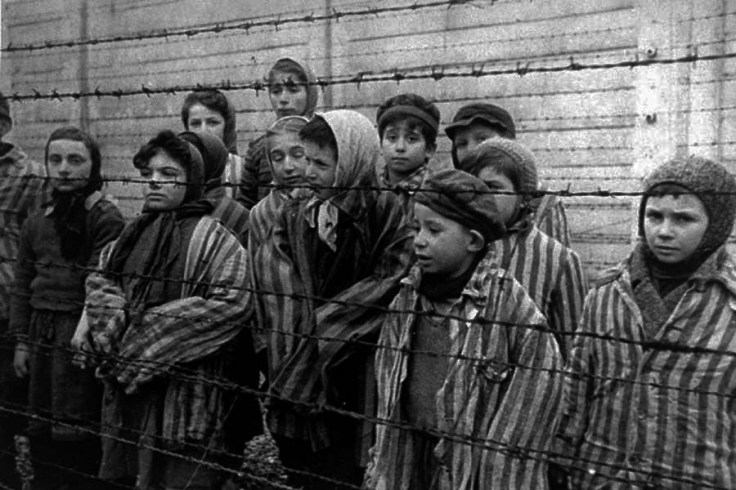 As Soviet troops approached Auschwitz in January 1945, most of its population was sent west on a death march. 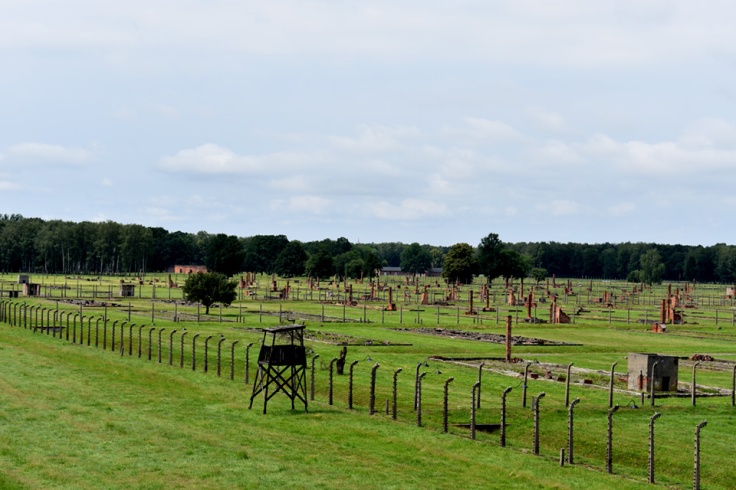 The prisoners remaining at the camp were liberated on 27 January 1945, a day now commemorated as International Holocaust Remembrance Day.

The SS destroyed most of the written records, and in the final week before the camp’s liberation, burned or demolished many of its buildings.

Most of the plundered goods from the ‘Canada’ barracks at Birkenau together with building supplies were transported to Germany.

The gas chambers as well as crematoria II and III at Birkenau were blown up.

On 26 January 1945, the last crematorium V at Birkenau was demolished with explosives just one day before the Soviet attack. 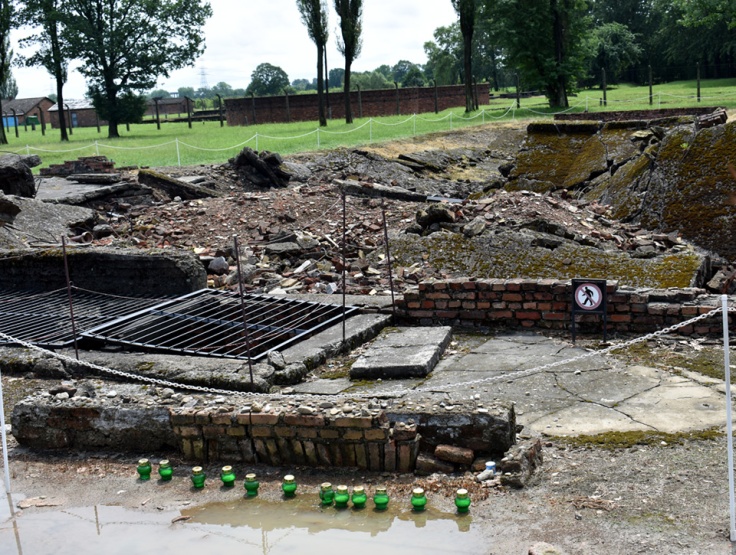 Himmler ordered the evacuation of all camps in January 1945, obligating camp commanders with making sure that not a single prisoner from the concentration camps falls alive into the hands of the enemy.

When Auschwitz was liberated on 26 and 27 January by the 322nd Rifle Division of the Red Army, the soldiers found 7,500 prisoners alive and over 600 corpses. 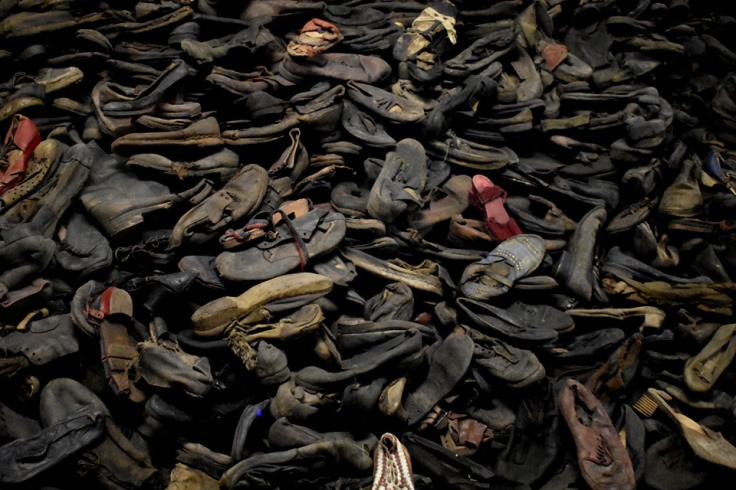 I was quite shocked when I entered the one of the brick barracks that was open for the public. I felt dizziness inside. 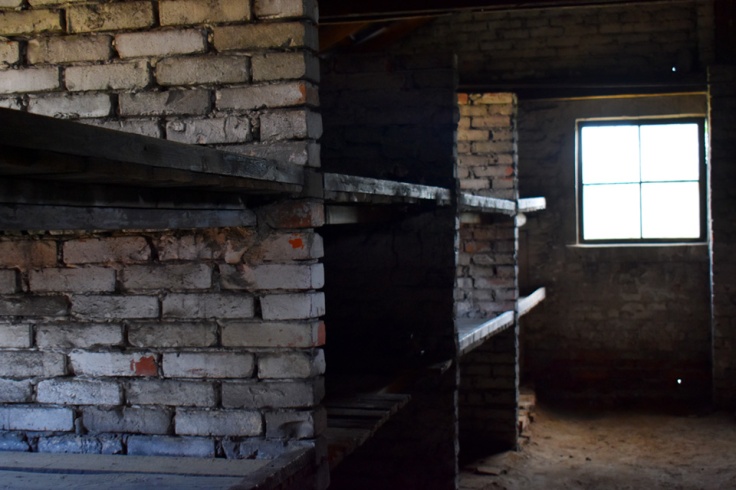 Like something was pressing my mouth, nose and throat that I could hardly breath. This experience was so emotional for me. 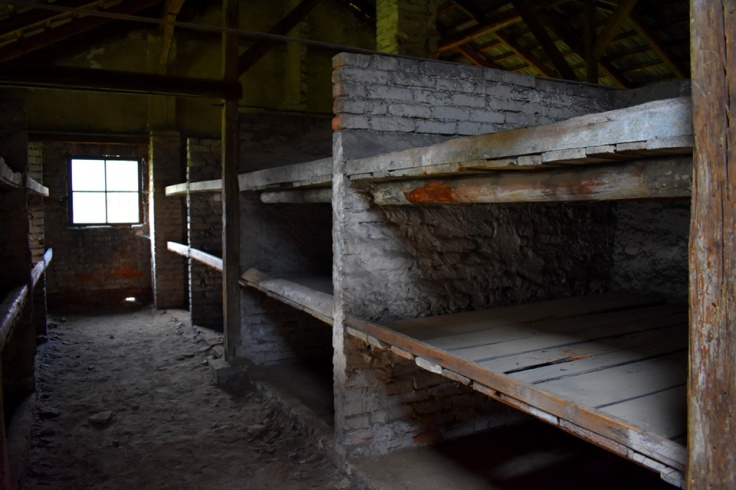 I could almost imagine what those people were going through there. I could hardly walk, my legs and hands were shaking.

It was so hard for me to stay longer inside. I felt like I was walking into the grave. Going out of there was the big relief for me.

It was the place where our guide said goodbye to us. One good thing about the guided tours at Auschwitz and Birkenau is that they are conducted through radio headsets. This means that the guide doesn’t have to raise the voice to be heard by the group and also that the group doesn’t have to herd together so much. If you don’t know much about the place I would recommend the organized guide tour.

Personally my eyes were full of tears. Later on we had approximately 40 minutes free, until the bus was about to depart for the Wieliczka Salt Mine the last stop of our day tour.

We decided to climb up on the entrance tower to take some photos of Birkenau from above.

Later on we walked slowly towards the bus parking, we were both very emotionally touched by all we saw and learn there.

If you wish to book the same tour, please press the word Birkenau (blue letters). We booked this tour through Viator. 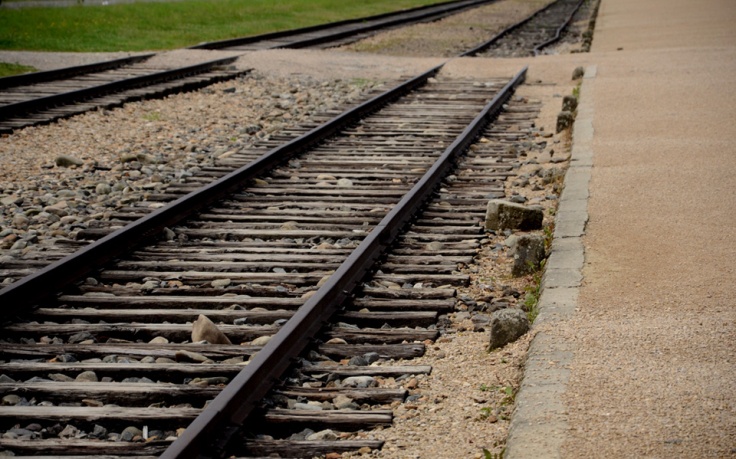 It was the most unpleasant thing that could happen to a tourist in the foreign country.

Stay tuned, and check my next blog post to find out what happened to me while I was leaving from Birkenau.