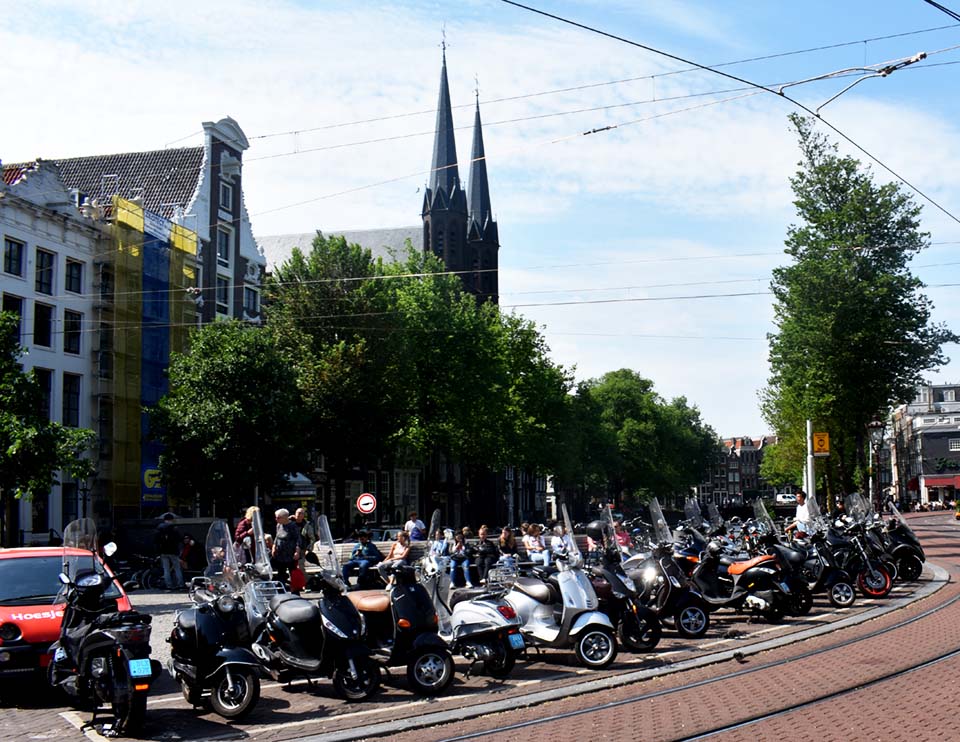 Post traumatic stress disorder (PTSD) is a psychiatric disorder that can occur in people who have experienced or witnessed a traumatic event such as a natural disaster, an accident, a terrorist act, war/combat, rape or other violent personal assault. PTSD symptoms are very common for most of the cases. In this blog post I will explain the most common symptoms through my personal story, that happened to me last summer, July 2019.

The last summer, 2019 by the end of July around 5PM I was riding my scooter on my way home from work. At the last roundabout before my neighborhood just a few km before my destination I had an accident. As I was approaching that last roundabout I saw a car in the roundabout in front of me. Therefore I pressed the brake to let the car pass, before I enter the roundabout.

Everyone knows that when you are squeezing the front brake lever or you press the rear brake pedal of your motorcycle you automatically illuminate the brake lights, so the vehicle behind you is able to see that you are about to slow down.

Plus, everyone knows the rule that a driver should ideally stay at least two seconds behind any vehicle that is directly in front of his or her vehicle. So called two-second rule is a rule of thumb by which every driver may maintain a safe trailing distance at any speed.

Unfortunately the driver that was driving behind me did not follow any of the rules. He actually opened the throttle in order to overtake from the left side and to enter the roundabout before me even though he could probably see (if he was looking) that I was slowing down for a reason. 5PM , summer time in the Netherlands was bright and sunny day with the perfect visibility. Since the streets in the Netherlands are very narrow in general he didn’t managed to overtake, so he hit me from my left side.

I fell down together with my scooter above me and the car dragged me for a few meters. It all happened so quickly. I felt burn on my left hand and leg. The blood was all over me. It was a summer time, so I didn’t wear any jacket. Just my jeans and a long tunic shirt with short sleeves. I had my helmet on, so I did not hurt my head, except some small scratches from my sun glasses on my face as they were pressed and smashed by my helmet.

The car finally stopped. I felt so weak and trembling. I was totally shocked. I could not move. Neither to lift my scooter above me. The car from the other lane on the right side also stopped. A gentleman from that car went quickly out and he helped me by lifting the scooter and helped me to get me up on my feet. He also parked my scooter on the pavement next to the street. The scooter was scratched. The big patches of my skin was also torn away from my left hand and my left leg. It was hurting so badly I have no words to describe the pain and the burn I felt.

While that man from the other car was helping me to get up I suddenly saw next to him one very well known face above me. That face belonged to my family doctor (who is also my neighbor by the way). His face seemed so apologetic, but he did nothing to help me to get up. I asked: Doctor, did you hit me? And he was like, yes, I am so sorry…

I felt so much anger toward him at the moment. I asked where he was looking? And then he said, sorry I didn’t see you? My whole body was shaking due the enormous stress. It was the first time in my life that I was involved in an accident. I thanked the man who helped me to get up and I asked him to call the police. He said that he will, but he didn’t, he just went back into his car and he drove away. So, I stayed alone with the doctor who hit me who also parked his car on the pavement next to my scooter. I tried to get my cell phone from my pocket but my hands were shaking so badly. I asked the man who hit me to call the police, but he refused. He said, there is no need for that, because we know each other. He said that I know where he lives, and assured me that I will be compensated for all the damage.

I said I don’t care, it was your fault. Please call the police immediately. But he kept saying that there was no need for that. He said that we will sign a paper and all the damage is going to be paid to me by his insurance company. He asked me where I want to meet with him in order to fill up and to sign the paper. I said in your office so you can take care of my wounds.

He didn’t even asked me if I am able to drive or if I need to go in the hospital. He just sat in his car, he waved to me from the window of his car, saying that he will wait for me in his office and he left. I felt so desperate. I was alone, injured and trembling. I tried to call the police after all but to my disappointment my cell phone was not responding (later on I realized, due the crash my phone battery was damaged). I just sat on the pavement next to my scooter and I cried for several minutes. Nobody passed by. It’s not a very busy street. I am also crying right now while I am writing this blog post even though so many months passed away from that accident.

I don’t know how I got the strength to get on my scooter again. I was in a great pain. While I was riding towards the doctors office I was shaking together with my bike. The doctor didn’t even asked how I felt. The only thing he said was that he is sorry. Later on he changed his first story that he didn’t saw me, and he said that he thought that I was about to turn right even though I was in the left lane while the other car (the man who helped me to get up) was at the right lane, about to turn right (who also like I did slow down so the car that was in the roundabout could pass, in order to turn right).

Anyway we fill up the damn paper after all. The doctor cleaned up a bit my wounds and put some plasters on. I asked for some more plasters, he said he didn’t have any more big plasters.

From the end of July until now February 2020, nobody from his insurance company ever got in touch with me regarding the compensation for my damages. I did get in touch with my insurance, but they asked of me to write down in detail all about the damages on my scooter and what else was destroyed from my personal belongings, but I still haven’t send that report to them. Why? I have no logical explanation for that.

I don’t want to do anything that can bring unpleasant memories of the accident back again. I had to make huge effort to write this article. While I am writing about it I feel so anxious and I am shaking. But it is about the time to face it, deal with it and let it go. People who read this would probably not believe me, but while I am typing this I feel the extreme pain through my entire body. Especially through my hands, they are so heavy.

I am really doing my best to deal with my condition. Even though the PTSD is usually linked with war and combat PTSD as you can see through my personal story it can also happen to the most positive, optimistic and extrovert individual like me. Susan Samerdyke, a behavioral health nurse practitioner for Lee Health, says anyone can experience PTSD. “If anybody goes through a traumatic event or is associated with a traumatic event it’s normal to feel hopeless, helpless, and out of control. They initially feel like the world is an unsafe place.”

After all even if I force myself to fill up the form for my insurance company regarding my damaged scooter, the clothes, shoes I was wearing, my phone, my helmet, my sun glasses, etc… There is no money on this world that could compensate the damage that was made to my mental health and my life. I am hoping to raise awareness though this blog post about the safety on the roads for everyone in general. Especially for the cyclists, motorcyclists and scooter riders, because in Amsterdam most of the people commute to work by bicycles, motorcycles and scooters. From the time that the mayor of Amsterdam banned scooters from the bicycle lanes the scooter (moped) riders are in a great danger. They have to deal with the angry car drivers yelling on them, cursing or hitting them with the excuse that they were not seen as it happened in my case.

So what I am suppose to do now? I cannot ride my scooter on the cyclist lane because I will be stopped by police and get fined. But I cannot either ride on the road because due I have scooter with the blue licence plates that is quite slow, I will get yelled or even killed by some angry car driver. Moped and light-moped riders are at relatively high risk of being a crash casualty in Amsterdam nowadays. The images I used for this post are from my article Small guide for tourists while in Amsterdam. from the My Amsterdam category. It was posted in May 2018, you are welcome to check it out.

If you are about to visit Amsterdam and you are looking for accommodation please check the link below with all the choices, pictures, prices, reviews and availability for your desired dates. Amsterdam: 1,472 properties to choose. I would appreciate a lot if you book your accommodation through my affiliate link. It is not going to cost you anything, but it can bring a small commission to my website from all the bookings made through my affiliate links, since I am registered as Booking.com affiliate partner.